Tom Heap is a television and radio presenter, best known for his contributions to the BBC’s Countryfile series, along with Panorama investigations and Radio 4’s Costing the Earth. So, when it comes to sustainability and renewable energy, Tom is particularly knowledgeable.

Tom lives in a picturesque village in the Warwickshire countryside and originally installed solar panels on one of his outbuildings in 2012, at the height of the Feed-In tariff payments.

At this time, Tom had two main motives for installing solar PV:

So, if we now fast forward to a year ago…

Tom was doing some work on his house and thought it would be a good time to look again at renewable energy, this time with a view towards heating his house. He was considering more solar panels, but also a battery to store energy as technology had now moved on to such a degree that batteries were now a plausible option.

In fact, there were two main reasons for installing the battery:

The system is currently 60% autonomous, which means that 60% of the energy Tom is using has come from renewable sources (solar PV and battery storage). Considering that he’s using some of the energy in the evenings for heating (drawing stored electricity from the battery), that’s an impressive return.

This has led to general behaviour changes around the house as, even though energy is stored by the battery there are certain activities that are still done when the sun shines. For example, if the house needs additional heating during the day, Tom will put the electric radiators on as it is effectively ‘free heating’.

In addition, Tom has installed an eddi, an add-on to the system that diverts excess energy to the hot water system, which Tom thinks is fantastic,

“it’s really noticeable when it is active as the hot water temperature is much warmer when the sun is shining!”

When the system was originally installed, there was an expected rate of return of 11.6% with annual revenue from the system of around £500. With changes to the way that Tom is now heating the house and using electric for other things such as cooking, there is now a greater demand on electricity in comparison to other energy sources. However, as 60% of this is coming from the solar panels, it is being generated with a much smaller carbon footprint and reducing Tom’s annual energy bills by around £500, which is as per the original expectations.

In addition, with big changes in the costs of production and installation of renewable energy systems, it cost a lot less overall to install this new system than Tom’s original panels 8 years ago, and that’s including the battery!

Tom now feels a personal sense of satisfaction that he is ‘doing his bit’ to reduce his impact on climate change and feels that he has achieved his original objectives. In fact, he is now considering more renewable energy options, such as small wind turbines to generate power from wind – a good combination with solar, as the power generated is not dependent upon the sun, meaning that when one system is not generating much power, the other one generally would be.

Tom originally chose Caplor to install his solar PV system after meeting Gareth and was impressed with the Caplor philosophy to renewable energy.

“In this industry you need to engage and establish relationships with suppliers, it’s not just fit and forget, so building up trust and respect is important.”

When asked what he would say to others thinking about installing renewable energy, he said:

“It definitely makes sense for anyone who has a concern about climate change and wants to make a difference. With the government making plans to stop traditional gas boilers being installed in new build homes from 2025, now is the time for homeowners to really think about the efficiency of their homes, with considerations around alternative heating methods such as electric or heat pumps.” 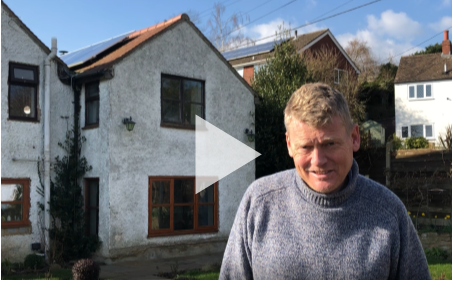 Tom has now installed a 4 kw solar PV system on his roof, with a Sonnen battery to store the energy he is generating, along with some aesthetically pleasing electric radiators in the house. These radiators have been sensitively designed as marble slabs, deliberately made with lower wattage so that they would be fully compatible with solar and take a consistently lower draw on energy generated from the panels.

From previous experience with his other solar PV system, Tom was aware of the level of energy that a 4kw system could generate, but he also knew that energy could only be used whilst the panels were actually working and drawing power from the sun, hence the need for a battery. It was always part of the idea to use electricity for heating, and Tom wanted to time-shift it for when the sun isn’t shining, one of the primary motivations for installing the battery.

“Whilst I’m not necessarily saving huge amounts of money on my electricity usage, I am definitely saving on carbon, which was one of my primary motivators for installing the system. So I’m now generating energy at a much lower climate cost for the planet at a comparable financial cost to me, which is really pleasing.”

We’d love to hear from you, please use the form below to get in touch: